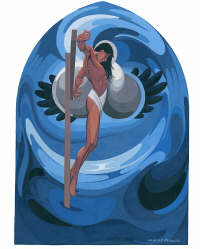 Oscar Howe’s mother Ella Fearless Bear Howe was a devout Episcopalian. When Oscar Howe and his family moved to Vermillion in 1957, they attended services at St. Paul’s, a structure built in 1950. In the 1960s, parishioners continued to speculate about the need for art on the church’s large and black wall behind the altar. Howe was challenged by one prominent church member to develop a mural for the area and he created a fully finished painting entitled Indian Christ for the wall which has taken over thirty years to be realized. The background of the project’s delay is best told in the following remembrance by Maxine Johnson, a longtime member of St. Paul’s congregation:

When I started attending services at St. Paul’s Church, often conversations regarding early church history would talk about the painting that Oscar Howe wanted to paint behind the altar but that it wasn’t allowed by the people in charge. There were always various reasons given such as it was too Catholic, we couldn’t have a picture of the crucified Christ in our church, especially portrayed as a Native American, etc. Over time, the memory of the painting that wasn’t faded and was hardly ever talked about. From time to time, it would be brought up and many folks would decry the fact that the painting hadn’t happened. As a result, we lost the Howe family’s attendance and we didn’t have Oscar’s quiet dignity present in our congregation or the delightful personalities of his wife, Heidi, and daughter Inge Dawn. Soon, the paining appeared as small version available at a local gift shop and there was a tapestry of it executed by master weaver Grete Bodegaard. The tapestry hangs in St. Joseph’s Indian School in Chamberlain and I though that was all I would ever see of this painting.Eventually, personalities and times changed and the congregation of St. Paul’s began to wonder about the “lost” painting and to lament the fact that it wasn’t present in our church. Lo and behold, it was discovered that the plan for Oscar Howe’s original painting for the space behind the altar in St. Paul’s Church had been preserved over the years. Permission was sought and granted for it to be copied onto the wall. Thanks to the steadfast energy of St. Paul’s clergy, Father David Hussey and Mother Mercy Hobbs, and Dean Emeritus of the USD College of Fine Arts, John Day, steps were taken to have the painting come to be in St. Paul’s – its intended home. Thanks to the talent and dedication of art students and the use of modern technology, the painting plan was projected onto the wall and subsequently completed using Oscar Howe’s original plan. To quote one of the parishioners –  “that  was then and this is now,” and late in the fall of 2007, the painting was completed and the congregation opted to install lighting which would highlight its presence.Now that the painting is completed and its quiet splendor enhances the beautiful stained glass windows designed by Gary Gurwell; it is hard to imagine that any controversy ever existed about whether or not the painting should be in St. Paul’s – it seems as though it has always been there and that is should always have been there.

The Final Phase
Oscar Howe’s mural was finally realized due to a providential combination of a dream that would not die, the determination of good people, the generous cooperation of the institutions, and the talent of two young and exceptional artists. Thanks to the good offices of the University of South Dakota Art Department, undergraduate art students Amber Hansen and Nicholas Ward were commissioned to translate Howe’s painting into the final mural. The pair worked 160 hours on the project and confidently confronted a range of new challenges that would have tested the resolve of more experienced muralists. The learning experience was rich and rewarding.

For additional information about Oscar Howe and Howe resources at the University of South Dakota, visit www.oscarhowe.org.